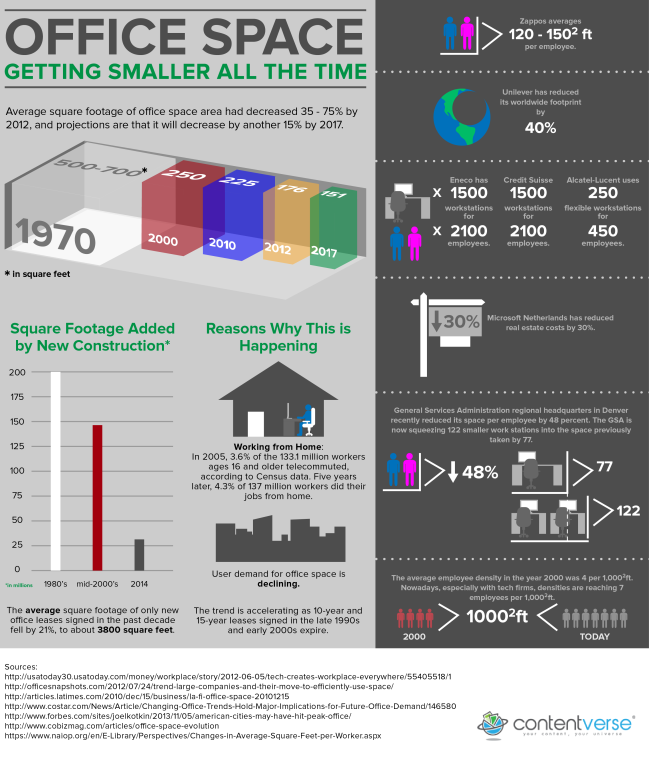 Office space is smaller than ever, and getting smaller still, according to research from CoreNet Global. Of the 465 companies surveyed, 24 percent said their staff had less than 100 square feet of workspace to call their own, while 40 percent said space would shrink to that level by 2017. Workspace has shrunk from 225 square feet in 2010 to 176 just four years later.
A recent infographic from document management software company Contentverse compiles stats on our ever-declining workspace. A few highlights :
•In the 1970s, American companies planned on at least 500 square feet per worker.
•Some tech firms have worker-to-space ratios of seven workers per 1000 square feet.
•Other companies have workers share flexible work stations. This is calling “hoteling,” as workers check in to the office and get assigned to a workspace for the day.
•Telecommuting is on the rise, as well, with over 5 million people working from home on a daily basis.
•Companies who renew their leases often cut the square footage of their space. According to commercial real estate information provider CoStar, the average square footage of commercial rentals fell 7 percent during the past 10 years.
What’s to blame for our shrinking workspace? The desire to save money and the corresponding popularity of open-plan offices are part of the picture. But the other side of the story is more positive: thanks to smaller and more portable electronics, we just don’t need as much space as we did in the older days.